Honeywell can trace its roots back to 1885, when an inventor named Albert Butz patented the furnace regulator and alarm. He formed the Butz Thermo-Electric Regulator Co., Minneapolis, on April 23, 1886, and a few weeks later invented a simple, yet ingenious device that he called the “damper flapper.”

Here’s how it worked. When a room cooled below a predetermined temperature, a thermostat closed the circuit and energized an armature. This pulled the stop from the motor gears, allowing a crank attached to the main motor shaft to turn one-half revolution. A chain connected to the crank opened the furnace’s air damper to let in air. This made the fire burn hotter. When the temperature rose to the preset level, the thermostat signaled the motor to turn another half revolution, closing the damper and damping the fire. The temperature correction was automatic. Over the years, many Honeywell products have been based upon similar, but more complicated closed-loop systems. 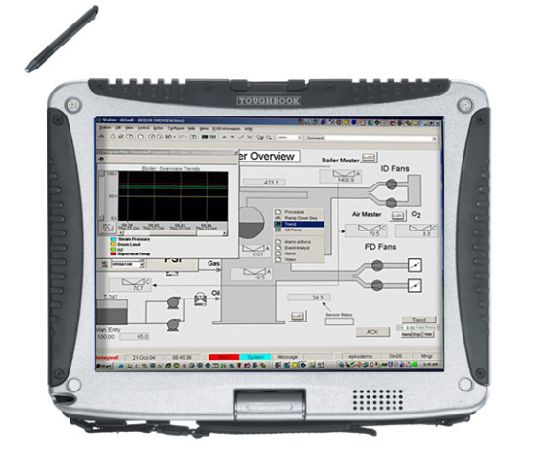 “Handheld access to process data allows users in the field to view the latest plant information while on the move, significantly enhancing operational performance”

“Mobile Access for Station provides read-only and write access to Experion graphics with dynamic data. This is accomplished via a Terminal Client connection to a Remote Engineering and Station Server (RESS) loaded with Station and Terminal Services. Using the Terminal client installed on the Tablet PC…”