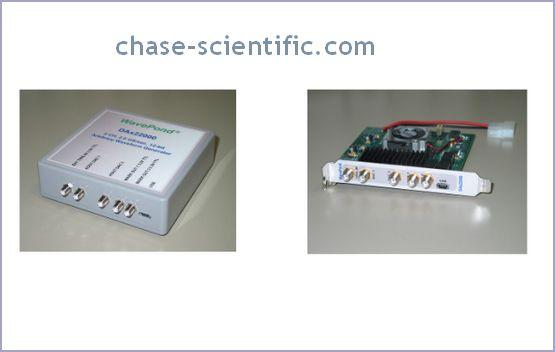 Ultra High Speed, low power, and compact Computer Based Digitizer cards as well as a family of the fastest Arbitrary Waveform Generator cards.

“Chase Scientific was originally founded as a consulting firm in 1987, specializing in advanced high speed analog and digital communication channels for the magnetic storage industry.”

It incorporates many advanced features such as programmable segment sizes, looping, and individual segment triggering. Since the data downloaded to the card can be arbitrary almost any waveform that the user can imagine can be created.

Whether it be random noise, a custom shaped pulse, a pure sine wave, a modulated sub carrier, or an encoded radar signature, the DAx14000 will faithfully reproduce it.

The high speed D/A clock generator can be referencedinternally or externally to 10 MHz. The internal clockgenerator is user programmable from 25 MS/sec to 4.0GS/sec with less than 5 psec jitter. The internal clockaccuracy is 1ppm standard or can lock to external 10MHz reference clock.